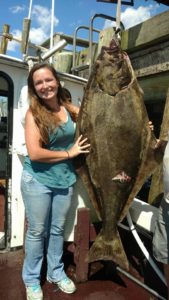 People are always talking about “PB”…or Personal Best…  I think…ok, what fish are special enough for that title?  It is a pretty cool feeling being the Captain when someone says “I’ve been fishing my whole life and that’s the biggest fish/best fishing I’ve ever had.”  The bummer about a “bucket list” fish is that catching one often makes say “ok, I did that, so what’s next?”  So, I don’t want to shoo away business by scratching off items on your list!!  Damn EGO….of course I want to get you your bucket list fish! 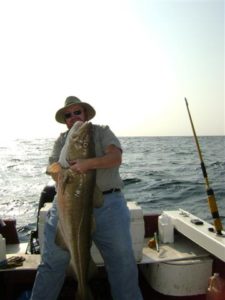 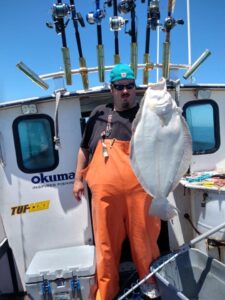 Fluke?  Oh yes, a 10# fluke has been a benchmark for years and the Nantucket Shoals Fluke fishing is where to meet your match.  For the New Jersey and other east coast fluke fishermen, this trip is getting more and more popular.  It’s a hike, but we’ll go fast and be ready for some monsters.

50# striper?  I don’t do a typically target the big cows, but they are out there. (catch and release nowadays)  They are typically a night fish for the biggest of them, but trying is trying.

20# bluefish?  If we can get into a school of these evil fish, you’ll be sore for weeks.

500# bluefin tuna?  That’s about 100 inches of drag pulling “go big or go home” perfection.  I like round numbers.  Last year was very good for the big fish; let’s home 2021 is even better.  Or, any bluefin with a spinning rod or jigging rod is worthy of patting yourself on the back.

8# haddock?  Yes, we don’t see many of those anymore.  Haddock are more of a numbers game for us.  It’s not a bad game to play, considering how tasty they are and how uncommon they were 20 years ago.  These trips make people think “best fishing I’ve ever had”.

6# black sea bass?  Yes, we see these and can target them in Buzzards Bay and the Islands.  They are fun to catch, are plentiful, and delicious.  We typically target them with small metal jigs on trout gear.  That makes it really fun to fish for them, regardless of how big they are. 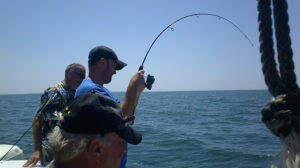 3# Porgy?  Early season we see them come into Buzzards Bay and they are so cool to see.  They fight like mad and their numbers are daunting.

ANY Halibut…  People ask every year about targeting them…We COULD make a run to Fippenies Ledge (I would love to, but plan on a $1,600 fare)…taking the small bait off of the haddock rigs and bouncing some big bucktails would increase our chances.  Most guys, while in “haddock land”, don’t want to slow the action down….but it would be great to have one guy on board always jigging a bait targeting the biggest flat fish in the sea.  Who knows, that’s the type of jig that may also hook a passing tuna or shark.

Black Fish?  Like the fluke, 10# is the magic number…  I’ve got some good numbers for this fall.  Anchoring over nice rock formations is the key.

Whiting?  Oh yes, we are seeing more and more of those golden dragons coming up in the haddock catches.  Seeing a 25″-30″ whiting is something special.  The only tough thing is NOT putting one of those out there as a bait for a giant tuna.

Sharks?  Oh yes, the Black Rose has made a good name for herself in the past 17 years catching lots of big sharks.  Whether you want to target giant sharks, vast numbers of sharks, or specific species; we can set you up nicely. 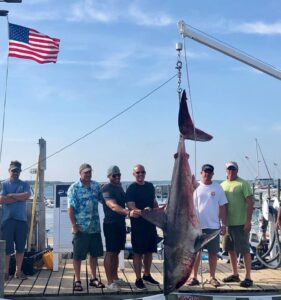 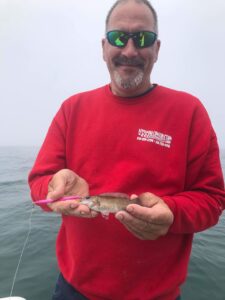 Well, it’s still late winter and many people haven’t made their plans yet for the summer.  If you have a wish, drop me a text or call me at 508-269-1882.  I’m taking reservations and talking fishing…