We will be fishing for squid and porgy soon in Mass.  It’s time to make reservations to get the days that you want.  People ask “when are you starting?”  There used to be a hard beginning to the season, like an opening day.  That hasn’t been the case for a decade, unfortunately.  Back in the day of sportsman shows and “opening day” for cod season on Stellwagen, people would crush the phones to get on the first trips of the year.  We had built a ton of anticipation over the years and the winters seemed to be longer and harsher back then.

Now, we have a great haddock fishery instead that lasts the whole season.  I love the guys whose calendars say “I’m almost out of last year’s catch” come April.  They want the fun of fishing with the satisfaction of a bucket of fillets.  For them, April is still prime time.

Now there is a new game in town.  Ok, not new.  But very LIMITED.  It is SQUID.   The season lasts around 10 days.  Yes, fishing off of Cape Cod in the last days of April and first week of May is becoming a rite of passage for many anglers.  Yes, calamari, fresh and plentiful.  Delicious.  Convenient.   A silly fish that will cover you (or comically, your friends) in black ink as you pull them over the rail.  It’s a short season, therefore, the “rush”.

At about the same time, porgies (scup), invade Buzzards Bay to spawn.  This is the time of year to go for jumbo porgies that may reach 3+# and give you numbers such that the limit is 50/person and this is done in a half day.  Guys will come up from the entire east coast for this fishery!  Many fish back-to-back days for a double limit on their trip to Buzzards Bay.  Because it is not the high season for tourism, hotel rates are low and it’s easy to come here to fish.  I like to think that Covid is over, so worries are low.  Come on up and fill some coolers. 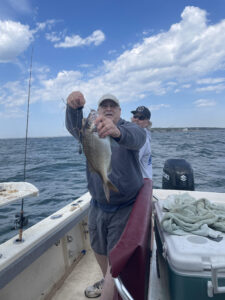