Thank you all for another great year on the Black Rose.  That was number 16.  I can’t believe that 2020 is coming up.  My daughter graduates from high school.   Wow.  I’m working on a video collage from this year. Admittedly, I took less video than in years past.  Unfortunately, I missed a lot of amazing sights.  If I had someone recording for me, here is a breakdown of things that we did, but never recorded.  Coolest thing?  We were using a 28″ whiting for bait and a giant mako took it, burning off 500 yards of line and then deciding to jump a few times, where it wrapped in the leader and broke us off.  You probably can’t imagine what that looks like.  500 yards is almost 1/3 of a mile, so when a fish starts jumping you think “no way that can be my fish!”  Then the line goes slack.  Of course, makos are known for turning on a dime, so “reel!!!” gets yelled and the futility of reeling in nothing as fast as you can “just in case” comes upon the whole crew…  That was horrible and awesome at the same time. 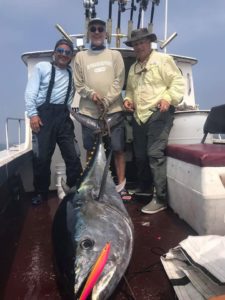 Not to be undone, casting and jigging for tuna off of Chatham one day, we jigged up a monster tuna.  Off to the races on a jigging rod.  We were undergunned. (I have some video of this).  But it was heartbreaking.  Every time we took the boat out of gear, we ran the risk of getting spooled against a locked-down drag.  So for nearly 3 hours the game was “let it run with the boat in gear, driving at an angle away from the fish until the line evaporated…then chase to get line back as fast as possible.  Repeat and wear the fish down.  After three hours, we switched rods to an Okuma Makaira 80 in a method that worked, albeit a chaotic maneuver…  All was going well on the gunwhale rod until the fish charged the boat and ran across the engine.  50 mile run home with nothing but heartbreak and soreness to show for it. 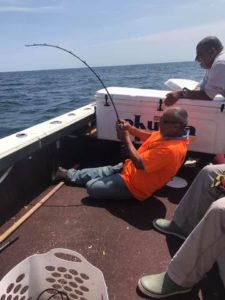 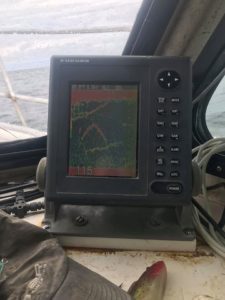 Haddock was our go-to this year once again for “action, predictability, and dinner.”  Strangely, the haddock stayed away from their usual haunts for a while.  This gave us a headache for a trip or two, but we found them in good numbers regardless.  I think we got our limit on almost every trip out there, when targeting haddock.  Not every trip, but for most of them it wasn’t difficult. 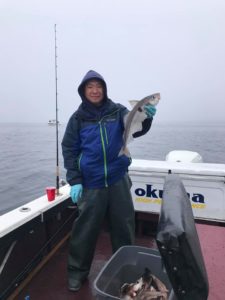 By summer time, we had the ability to fish for haddock while keeping our eye on the tuna….In one of the most comical ironies of all year, we had this happen.  “Rich, get over here now!  The tuna are busting!”  Said Capt. Dom Petrarca on Coastal Charters.  I relay the message to the guys “Hey, do you want to go for tuna?  It’s an 8 mile run.”  So we run over there full tilt.  Arriving on scene, the blitzing was dying off, but we had a few schools on the surface still.  Four guys casting with very little experience casting…. As I often say, with tuna fishing, the casts often have to be perfect; the retrieve done to entice the tuna just right…  It was obvious after 20 minutes that we should go back haddock fishing.  No problem; we saw some awesome sights.  Arriving back to our haddock spot, four guys drop their jigs to the bottom….Immediately, two guys hook tuna!  Oh was it a mess!  With only 200 yards of line on the Okuma Komodo, and heavy drag, the fish dove under the boat, doubling the rod and completely shocking the angler.  It was almost unfair the abuse that fish put on him.  It busted the jig off.  Now we had one fish on and lines cleared.  It was going away from the boat; the customer was in control and the reel “felt predictable”…  Nearly 20# of drag on the little reel and 400 yards of line gave us a little time.  Settling in, the customer did everything right for the 30-60 seconds he was on the fish.  I started the engine and gave chase.  It was perfect.  We had a chance.  As the line evaporated off of the reel, the physics took over—drag on the fish increased with the line in the water and smaller spool diameter….It was enough to straighten out a teaser hook that connected us.   That happens. It was heartbreaking to me.  (I don’t know if they could understand how cool it was to double up on tuna minutes after giving up on tuna.)  But there are tuna on the haddock grounds in better numbers than I appreciate, so next year we will have tougher hooks on our teasers “just in case.” 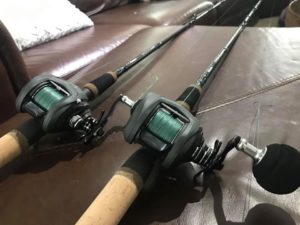 (this is the combo that he hooked the tuna on!)

One halibut this year….I love seeing these fish!  As soon as it hit, I watched the 8′ jigging rod bounce fast and hard….”halibut” I said instinctively.  The angler fought it great; the reel was a prototype Okuma reel with extremely smooth drag and the rod tip was soft, giving with every head shake.  With the harpoon ready, I saw the big head and mouth come from underneath the boat…..I like the security of knowing that the dart goes right through these fish, securing them in no uncertain way to the dinner plates of many people!  53″ long and 68#.  Not a bad fish at all! 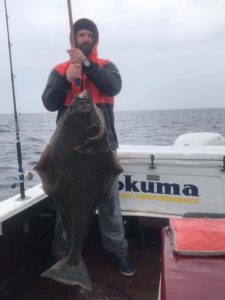 In the spring, however, the winds blew.  May was windier than in any of the past 16 years of doing these trips.  One thing that doesn’t disappoint, (I’ll talk about one trip that did), is the porgy/scup fishery in Buzzards Bay.  Wind is not a factor here, as we anchor up after a short trip to the fishing grounds.  I can hold bottom with anchor in almost any seas there and the fishery is hot.  People understand that the trips are half-day and that I run two trips in a day.  One thing that people like to do is fish one afternoon, followed by the morning trip the next day in order to get a double limit of porgy (50/person/day).  In all of the years of running these trips, it didn’t matter what we dropped for bait.  The fish hit.  One day this year that wasn’t the case.  I ran a trip with mackerel, herring, and enough gulp as backup to choke the fish for a mile around.  They only wanted clams and I got roasted for my lack of production that day.  Fair enough.  I wasn’t railed for a lack of effort, nor personality, but for not catching scup.  It was painful.  15 gallons of clams later, I think that my hedge worked for the rest of the season! (and going forward next year.) 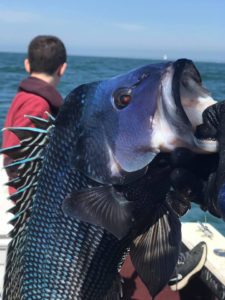 Add the black sea bass to the mix in Buzzards Bay around mid-May and the fishing is incredible there.  I have two types of sea bass fishermen:  One adds the sea bass to the scup quota for an added 5 fish bonus and the other is just into catching sea bass because it is that much fun on the light tackle and small jigs.  I mean light tackle=trout gear.  For them, it’s about getting the kids on a great bite; eating the best eating fish in the area, and just “pure fishing fun”.  Every year Buzzards Bay gets a good run of schoolie stripers that move in.  Last year, however, we were sea bass fishing and saw some bass splashing….Quickly putting on a tiny popper with the trout gear and casting into the fish we realized that those splashes were “real” fish….That gave us some of the best action of the year, combining sea bass fishing with striper fishing.  Luckily the biggest ones we caught (44″ and 46″) were caught on slightly larger combos.  It was a double-header that my customers will never forget!

Speaking of stripers, I think that the seals and great whites are changing their patterns quite a bit.  We will see what happens, but the backside of Cape Cod has plenty of seals!  We had some nice bass around the giant pogy schools last years.  Seeing those giant schools of pogies is something else.  I will plan on that fishery more next year as it also is a great place to find tuna.  It’s going to be a fun year again. 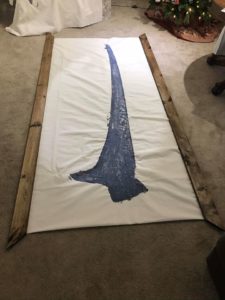 This tail print came off of the coolest battle we ever had on the boat.   I took a group from Quebec fishing for sharks–the weather didn’t fully cooperate, so we started for stripers….when the winds lifted, we made the run for sharks….I was hesitant because I didn’t want to beat them up; as it turned out, the seas went flat.  Mirror flat.  Our drift was good; the mackerel and whiting were thick and kept them busy.  I was watching the sounder and saw a streak come up to the bait and then turn around going back down…with the tell-tale “clicker” noise.  We were tight and the first run told me that it wasn’t a blue shark..  On super flat water, there is nothing like seeing a thresher jump.  That amped up the game.  Without full English capabilities, all of the instructions that fly out of my mouth don’t mean anything!  These guys could read my mind, though, and that defies language.  Luckily.

One guy was standing on my roof with the best view in the world.  He didn’t have words when the great white appeared and shadowed the thresher on every move.  The thresher didn’t like that!  I didn’t want to lose the shark; the battle went on another 20 minutes with the great white right next to it or under it or hiding under the boat.  It was enormous.  The girth was off the charts.  It was big enough that I thought “basking shark”.  But it wasn’t.  It was a huge great white.  So I take a “hail Mary, poon throw to try to end the battle quickly.”  Not only did I miss, but the clip holding the harpoon to the line broke off of the shaft!  Now I am left with a straight gaff to work with.  I don’t recommend using a straight gaff on sharks, let alone a thresher shark.  However, I took only one slap to the face while gaffing it and the guys got it tail wrapped quickly.  We were prepared pretty well for the end game.  Like I said, they could read my mind.

The great white was still circling.  Using the gaff a couple of times to push it away, four of us hauled it over the rail as fast as we could.  A block and tackle made short order of that!  It wasn’t huge by any measure, but still a great eating shark.  It was in the 300# ballpark, so it wasn’t too shabby.  I’ve been spoiled by big sharks over the past couple of years…

Shark fishing was strange this year….they came in late on Stellwagen Bank.  At least a month later than normal.  Once they came, it was silly.  but we struggled early on with the sharks.  I will say “luckily”, here, but luckily for us we nailed the largest shark in the 2019 North Atlantic Monster Shark Tourney, coming in second place overall, despite not fishing the second day of the tourney because of an engine issue…  We landed a 413# porbeagle on the first day.  It was a tricky beast, throwing the hook on three anglers before Casey hooked it solidly  It was hell bent on eating what we were throwing.  In the past four years of fishing in this tournament, we have come in second twice and won it once.  And on the other one, we landed 36 sharks in two days (with only two anglers).  I still love shark fishing! 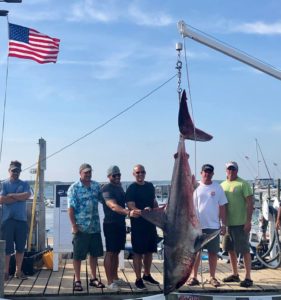 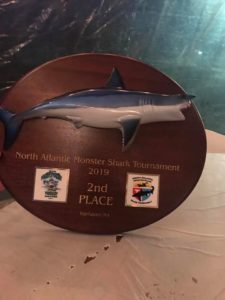 Ending with this thought on tuna….it is so delicious…but very versatile so have fun preparing it! 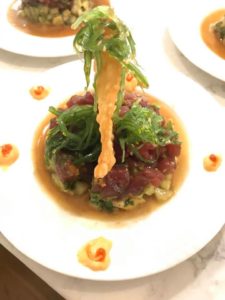 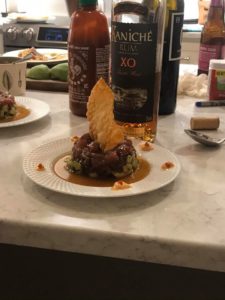